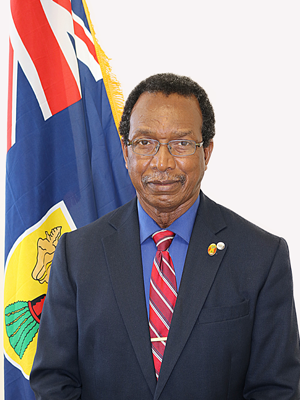 The second of six children, I learned the value of responsibility at an early age, most importantly love, as I often cared for my younger siblings. Upon completion of the Grand Turk High school I was fortunate to have a family friend groom me for a career in which i excelled. Becoming an established contractor I take tremendous pride in being in a position to provide job opportunities and mentor to many of the residents in Grand Turk. My love for this country and my people has prompt me to once again offer myself to service. I am committed to the advancement of my people and pledge my unwavering support for better representation for Grand Turk and the entire TCI.

Upon completion of his formal education in 1970, Mr. Taylor joined the Civil Service of the Turks and Caicos Islands, a place where he developed his skill and love for service. In Grand Turk he served as an employee in the Treasury and Customs Department. During his more final years in the Civil Service, he served in several managerial administrative roles, that of District Commissioner in South Caicos, Middle Caicos and North Caicos and Deputy Collector of Customs. He also served on a number of Board and Committees. His natural ability to lead saw him rise to the higher echelons in the Civil Service Associations, having served two years as President and seven years as Vice President. While in the Service, he attended many courses, seminars and workshops in the Region and the United Kingdom.

He continues to embrace every opportunity to serve in his community. He is known for his work with all ages, whether it be for his regular visits to the Wellness Center and the hospital where he would spread cheer among the old and the sick, or assisting in any way he can with the children of our schools and community. A founding member of the Kiwanis Club of Grand Turk, he is currently the immediate Past President and he held the office of Presidency three times in the Club’s history. He is also a member of the Red Cross, a member of the Board of Trustees of the National Museum since its inception, a member of the Turks and Caicos Islands Cancer Foundation and Chairman of the Higher Education Advisory Board. He also serves as a Justice of the Peace and a Notary Public.

In 2012, Mr. Taylor came out of retirement to stand as an All Island Candidate in the General Elections. He amassed the 3rd highest number of votes evidencing a great respect and the nation’s confidence in his ability to lead and serve in difficult times. Following the Election he served on the Appropriations and Public Accounts Parliamentary Committees and was the mover of a Private Members’ Motion that saw a sitting Government defeated in a vote for the first time ever. He continues to serve with humility and distinction.

Mr. Taylor is cousin to the founder of our political system, first Chief Minister and only named National Hero, the Late JAGS McCartney, husband to one wife, father and grandfather. He is a child of God and an active member of the Methodist Church, where is a lay preacher. Those who know and love him, respect him for his honesty, integrity and genuine goodwill. He is held in high esteem by his fellowmen and by those who had the privilege to meet him at regional and international levels.

While serving as Chief Minister he attended various courses, seminars and events, including the Presidential Prayer Breakfast in Washington. He served on the Board of Governors of the Caribbean Development Bank on three separate occasions. He was also elected as the first President of the Overseas Countries and Territories Association (OCTA).

He was honored by the Queen during the Millennia Celebrations in 2000 and he received the Order of the British Empire joining a small and exclusive list.

Shortly after victory in 2003, Bi- Elections were held by an Order of the Court and the Party lost its majority. Mr. Taylor served as Leader of the Opposition until his retirement in 2007.