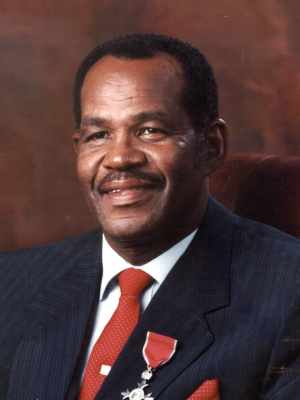 Albray Victor Butterfield Snr. D.H.L., N.P., M.B.E., was born on October 3rd, 1936, in The District of Kew, North Caicos, Turks & Caicos Islands. Among his school mates and colleagues, he was given the nick-name “Art.” He attended the Kew Elementary School up to the age of 16 years, where he was tutored by two of the islands greatest giants in the history of education in these Islands, The late Violet Oseta Higgs Jolly and the late Charles Hubert James, Snr. Art, was the youngest son to Thomas Nathaniel Butterfield and Caroline Adams Butterfield of North Caicos. Art’s father was very much involved in public life during his early years, as the Town Councillor, managing the family’s Grocery Business, a Minister of the Gospel and the Town’s Local Dentist. This influenced Art to stay around his father, who soon developed a great amount of love and respect for his young son. Art, was soon crowned the family’s Trustee and his father’s right hand man. During the elderly years of his mother and father he became a personal caretaker of his parents and other family members.

1956-1959 - At the age of 17, he joined the Police Force, where he completed training in police duties at the Police Training School, in Grand Turk, Turks & Caicos Islands; a post from which he resigned in 1959.

1959-1970 - He left the Turks & Caicos Islands on vacation. While on vacation he took a job on the M.V. Vera G. as an Oiler, working for Canaveral International Corporation, at Cape Canaveral, Florida; on contract to the Military Sea Transportation Service. There he worked his way up to becoming The Chief Engineer and later, became Port Engineer at Cape Canaveral, Florida. He spent a total of fourteen and a half years in this capacity where he worked for six years as an Engineer, four years as Chief Engineer, four and a half years as Port Engineer and Marine Superintendent for Military Sea Transport.

1961 - He met and married Rosita Beatrice Missick, on March 22, after an eight year courtship. She was the daughter of Isaiah V. Missick and Savilita A. Higgs Missick of Kew, North Caicos. His union with her for the past 38 years, reared three children, a daughter and two sons.

Art, while serving on navy ships, for The Military Sea Transportation Service, completed training as a Marine Engineer at Cape Canaveral, Florida. He also qualified himself through correspondence courses as a Refrigeration and Air Conditioning Technician, from The National Technical Institute, Los Angeles, California, and as a Mechanical Engineer, from the Navy Marine Division, Marine Institute, New York.

1969 - Having a great love for sea life, and being the son and grand son of parents who, earned their living from the sea; and plied these waters for many years, between Curacao, The Bahamas, and Haiti, and sometimes even the U. S. Mainland; Art, like all of his other ancestors had the opportunity to travel to various countries from Cape Canaveral, Florida, taking supplies for The US Guided Missile Bases, which included: The U.S.A., Bahamas, Turks & Caicos, Puerto Rico, Antigua, Trinidad, Barbados and The Ascension Islands, back to Cape Canaveral, the home Port. On a visit to South Caicos, to deliver drinking water due to a severe drought experienced in the islands in 1968, he became concerned about the loss of catch of lobsters that died while being transported to the Fishing Plant, by the Fishermen from the Caicos Islands. This motivated him to return to his homeland and start Butterfield Fisheries in Five Cays, which he later sold.

Mr. Butterfield became the Second Developer on the Island of Providenciales, following Provident Limited. He lived at The Third Turtle Inn for one year, and part time with his friends.

1990 - Her Royal Highness (HRH), Her Majesty, The Queen Elizabeth The II, as head of the Commonwealth of Nations, awarded Art with The Title of Member of the British Empire (M.B.E.) At Buckingham Palace, London. This award is given for Long and Distinguished Service to the country. He was Appointed a Notary Public by the Government of The Turks and Caicos Islands. In 1993, Mellen University in Canada awarded Art, an Honorary Degree, “Doctor of Humane Letters (D.H.L.). In 1995, while attending a church conference in Freeport, Grand Bahamas, with Ministers from around The United States and The Bahamas, Mr. Butterfield was ordained as a Bishop, to The Christian Ministry by Bishops: Wiliiam McKinney, Noel Jones, Bob Porter, Elder Liston Page, all from The United States of America.

Albray Butterfield Snr., has a great love for sports, he enjoys in his spare time watching wrestling and baseball. He has developed great love for outdoor life: fishing, swimming especially swimming with his grand children at home in the pooi, with whom he spends a great deal of time. His favourite T. V. Programs include: National Geographic, The Arts & Entertainment Network- Biography, Sports Column on ESPN, International and Local News, and a wide range of Gospel Programs. Interests include the harmony of family life, taking on challenges, being diligent in business affairs, enjoying a sense of humor with friends and people in general. Enjoyment of teaching is a personal satisfaction. “I do have a great love for animals, especially dogs.

1992 - Art, became the Champion for the Turks & Caicos International Billfish Tournament. He caught the largest Marlin during the event (396 lb). His boat “The Rosie B.” was also the champion boat for the tournament that year.

Mr. Butterfield currently serves as Chairman of the Board of Directors for The Butterfield Gold Ltd. Group of Companies. When asked what was considered his greatest achievements, Art responded with a smile, “raising my children to maturity, having a wonderful wife, being called to the Ministry, and being a successful Businessman for thirty one years; and I do love to be a part of any community project. I love work, I am not afraid of work, and I am a full supporter of a clean environment.” As for Albray Victor Butterfield Snr., D.H.L., N.R., M.B.E.