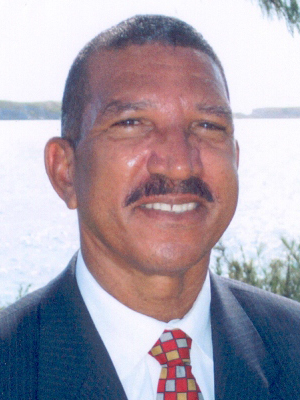 Born 1943 To parents Norman Saunders and Iris Lightbourn/Saunders
Education: Attended the South Caicos Primary School
1957-1960 Attended the Turks & Caicos High School, now the H. J. Robinson High
School, graduating at the top of the class in 1960.
1961-1964 Employed by Turks Island Salt Company as an office clerk.
During that time he took correspondence courses in Bookkeeping and
Accounting.
1964-1974 Employed by The Caicos Company as Accountant, rising to the post of
Assistant Managing Director.
During that time he took accounting courses with the Rapid Results
College, preparing for the ACCA professional exams. his greater
involvement in politics and business forced him to discontinue my
accounting career.
1974-1999 Became owner/manager of Caicos Air Services Ltd.
1995-1999 Managed Club Carib
1999- Operator/Manager of Caicos Fisheries Ltd.
present
Political Career
1967-1985 Elected Member of the Legislature for South Caicos
1967-1976 Elected Member of the Executive Council
1967 -1976 Appointed member of the Planning & Development Authority.
1969 Elected as a member of the Constitutional Delegation to meet with Lord
Shepherd in Nassau, resulting in a Constitutional change here that year.
1969 Toured England and the Channel Islands on a trip sponsored by the
Central Office of Information. (COI)
1969 Legislative Assembly appointee to tour and examine the development
policies of Bahamas, Cayman Islands, Barbados and Martinique, and to
make recommendations to the government on policies to be adopted
in the Turks and Caicos Islands.
1970-1976 Served as first Executive Chairman of the Tourist Board
1971 Member of the TCI delegation to the Bahamas to discuss immigration
matters.
Hon. Norman B. Saunders, Sr.
23
1975 TCI delegate in negotiations with Exxon on proposed Exxon refinery on
West Caicos.
1976 Member of the Currency Committee that made the change from the
Jamaican dollar to the US dollar.
1980-1985 Became Chief Minister with responsibility, among other things, for
Immigration, Fisheries, Civil Aviation.
1995- Re-elected as a Member of the Legislative Assembly.
To present
Attended several CPA Plenary Conferences
1970 Malawi
1972 New Delhi, India
1980 Fiji, South Pacific
1996 Kuala Lumpur, Malaysia
1997 Mauritius (as an observer)
An avid sportsman and outdoors man
Passionate about cricket. and an accomplished spin bowler. Was a member of the TCI
Cricket Team that toured the Bahamas in 1960 and 1971, and captured the bowing prize
on both occasions.
Plays good tennis. Was the first TCI tennis champion.
A keen sailor. Won many sail boat races.
A fisherman and a hunter.
A Methodist Local Preacher
Married and has four adult children.