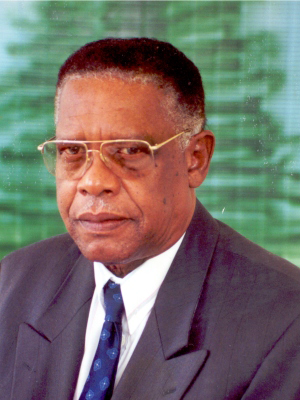 Austin Alexander Robinson,OBE was born on 28 December 1931, the second son and third child of Richard and Winfred Robinson. He was educated from 1938-1943 at Grand Turk Primary School, and from 1944-1947 at the H.J. Robinson High School, then called the Government Senior School. There he passed the Junior Cambridge School Certificate with a distinction and six credits.

After leaving school he was employed for two years by a firm in the private sector in Grand Turk. In 1950 he joined the Treasury and Customs Department where he worked for three years before joining the Merchant Navy .After five years in the Navy he returned to the Territory and for another five years until 1964, was an Accountant with the Turks Island Salt Company Limited.

In 1965 he rejoined the Civil Service and was respectively Administrative Assistant, Internal Auditor, Treasurer and Deputy Financial Secretary. In 1984 he was appointed to act as Financial Secretary. In 1987 he was honoured by Her Majesty The Queen by being appointed a Member of the Most Excellent Order of the British Empire. In 1994-1995 he was appointed Speaker of the Legislative Council. In 1997-2000 he was Member of the Public Service Commission. He is the father of nine children and is married to Carmen Robinson (nee Ellis).