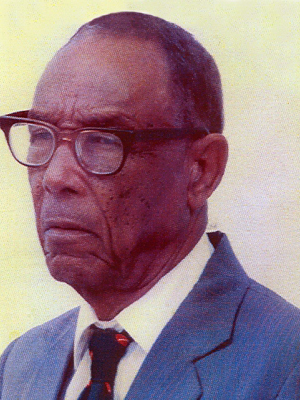 The late Nathaniel Joseph Selver Francis more affectionately called “Bops” was born at Grand Turk in the Turks and Caicos Islands on 6th May 1912 to Nathaniel Joseph and Helena Louise Francis nee Selver.

At an early age he attended school at the home of his grandparents Nathaniel H. Selver, JP under the tutorship of his aunt Clara Selver. At age seven (7) years he was enrolled at the Grand Turk Elementary School until his fourteenth birthday and then moved on to the all Age School under the late Mr. Crawford.

Nathaniel was from a long line of Methodist and became a full member of the Methodist Church in 1932 by Reverend H. B. Sherlock. Before his full acceptance into the Church, he was a Sunday School Teacher and Secretary.

During his school days, he was taught the profession of printing by his father who was the Government Printer.

At the death of his father in 1938 he went to work in the Public Works Department as Assistant to the Superintendent of Public Works.

While working in P.W.D. he became interested in the legal field and then began a career of assisting the less fortunate ones in the Courts of the Land. To this end he was very useful and very successful although by the Laws of the Land, he was not entitled to charge for his services, he continued to help his fellow men in the Courts both Magistrate and Supreme and so outstanding and successful he was the Commissioner of the day E. P. Arrowsmith asked him to consider giving up the practice as he was getting too many criminals off at large in the communities of our many Islands, and further asked him to consider going to Jamaica to be articled in a very reputable legal firm and on his return home to work for the Government when required, however, this did not materialize.

In the very early 1940's he was appointed Inspector of Nuisance, a post he held until 1945 when he was accepted to study Public Health at the School for Public Health Inspectors in Jamaica. On his return he was appointed the first Public Health Inspector in the Turks and Caicos Islands. He went about that task with vigor, knowledge and a burning desire to help his country and its people. At that time there were no health standards so he immediately set about writing and implementing a Code of Health Laws and Standards to be obeyed and kept. (It should be understood that, at this time many of our health problems were caused by low or no health protection laws. Flies, mosquitoes, fleas, ticks, hook and other worm infestations were very prevalent also head and body lice were just about everywhere and the schools were more heavily infested than elsewhere).

Nathaniel set about rectifying the health problems in the schools.

His hard, knowledgeable and devoted approach to this problem resulted in the complete eradication of these parasites, which further resulted in better health of the children evidenced by the increase in school attendances. N.J.S. did not merely leave the problem there, he set about giving lectures on tape worms, showing its spread from pig to man and how this spread could be stopped. His lectures both at schools and in public were always instructive and well attended.

Nathaniel had the ability to speak to school children at their level on health subjects in a manner in which they were able to grasp and to comprehend the subject of his discussion and the children looked forward to his visits. It could be said that without sensible and knowledgeable contradiction, that no man before or since Nathaniel J. S. Francis has added so much to the environmental health of these Islands. He was indeed the Pioneer in Environmental Health.

His work in the family Islands was most outstanding and successful. Our first Medical Practitioner here in the TCI once said, “Mr. Francis, lecture at my school excited me and caused me to study medicine.” In the Family Islands this man will never be forgotten!

N.J. S. continued in the field of Public Health until 1972 when he resigned and became involved in politics running for election to the Legislature of these Islands. He has never lost an election; in fact he is considered a most outstanding Politician. He is known and loved by all, friend and foe for his statesmanship, his love for his fellowman as well as his love for his country but particularly for the people of Over Back.

He served in what was called 'Open House Politics' before the introduction of the Ministerial System of Government. Mr. Francis along with his colleagues such as NB, Headley Durham, Dan Malcolm and Art Butterfield worked tirelessly with the Constitutional Commission With the introduction of that Constitution Bops found himself in Opposition. In 1980 he was appointed as a Minister. In 1985 with the PNP’s victory at the polls he was appointed Minister and Chief Minister in 1985 following the crisis of that period.

It may be true to say that no Member of Government past or present had a career like Bops. Mr. Francis met with Her Majesty, Queen Elizabeth the Second twice, once at Grand Turk and once in London. It is said that he had the longest talk with the Queen. He also met the Duke of Edinburgh on many occasions as well as the Prince of Wales and was introduced to the Queen’s mother. Mr. Francis has met with Princess Margaret Rose; Prime Minister of Canada, and the President of Kenya. He met many, if not all of the Prime Ministers of the Region of his era including Sir Lynden Pindling who was the first Head of State to visit the Islands.

Mr. Francis met Sir Alexander Bustamante, Norman Manley and Michael Manley of Jamaica; Prime Minister Eric Williams of Trinidad and Tobago, Prime Minister Tom Adams of Barbados; Vere Byrd of Antigua, Prime Minister Eugenia Charles of Dominica; represented the TCI at the Independence of St. Kitts and Nevis - met on more than one occasion with the Chief Minister of the British Virgin Islands and had the distinct pleasure and honour of meeting with President Ronald Reagan of the United States of America during his attendance to the Presidential Prayer Breakfast.

Nathaniel Joseph Selver Francis (Bops) was one of the leading members of the Legislative Council to arrange for the use of the U.S. Currency as the official currency of these Islands. At all meetings and visits, Mr. Francis took the opportunity to promote his Islands as a tax - haven and tourist destination.

In the field of sports, he was an outstanding cricketer and did much to keep the greatest game alive in these Islands and the Region. He captained the Island's local team against Jamaican and Bahamian teams. His name became a household name in many homes both here and abroad. He was known as a gentleman cricketer at home and abroad. The Bahamas Government and People held him in high praise and congratulations for reviving the 'English Game' at home.

Mr. Francis is truly one of our greatest sons, loved and respected by all. His work in the Family Islands could never be over estimated, he was indeed a Health Pioneer.

Our Islands and people owe him like no other, thanks, praise, honour and everlasting gratitude.