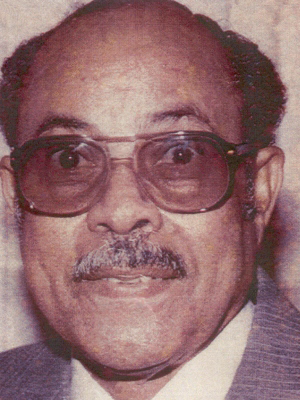 He attended the South Caicos all-age school under the tutelage of Mr. C. D. Powell, his godfather. After completing his education he found employment as a messenger at the Commissioner's Office in South Caicos. Mr. E. G. Ewing, the then Commissioner took a special interest in him and groomed him for the business world.

Mr. William Henry Mills, was awarded the MBE and later OBE by H. M. the Queen. He served in the first Legislative Council under the 1976 Constitution when he was appointed by the then Governor to serve as the Governor's Appointed Member. He was elected by the House as Deputy Speaker and served in the capacity until 1980.

In November 1980, Mr. Mills was elected by the House as its Second Speaker, and by convention was President of the Local Branch of the Commonwealth Parliamentary Association. He was re-elected Speaker in 1984, serving until March, 1988.

In 1978 he attended the Bi-Annual Presiding Officers and Clerks Conference held in Montserrat. It was at this Conference where Speaker Mills displayed his knowledge in Parliamentary Practices and Procedures. He ranked highly from thereon with well-known Caribbean Speakers such as the late Burton Hinds of Barbados, Ripton McPherson of Jamaica, Professor Sir Howard Fergus of Montserrat, Sinclair Daniel of St. Lucia and the late Dame Dr. Doris Johnson of the Bahamas.

In 1981 he was appointed as one of the Resource Speakers to the first ever Regional Parliamentary Seminar sponsored by CPA Headquarters and the St. Kitts Branch of the CPA.

Speaker Mills was the first Speaker of the Turks and Caicos to attend the US Presidential National Prayer Breakfast. It was at the Prayer Breakfast in 1982 that he met Congressman William (Bill) Nelson, the then Congregational Representative for Cape Carnival District in Florida. The two struck up a friendship that lasted until Speaker Mills retired from the speakership in 1988. He also met and established a friendship with Governor Bob Graham of Florida. During his attendance at the National Prayer Breakfast he and the Clerk were frequently invited as dinner guests to the home of Congressman William (Bill) Nelson. In the Summer of 1983 during the Congressional recess Congressman William (Bill) Nelson accompanied by his staff, on a visit to several Caribbean Islands, stopped off in Grand Turk where he held official meetings with Speaker Mills, Government Ministers and paid a courtesy call on His Excellency the Governor. Congressman Nelson had hoped to establish a link between TCI Legislative Council and the Florida State Legislature. At the first Prayer Breakfast Mr .Mills attended he had an opportunity to dine with Vice President George Bush, Snr and was introduced in the receiving line to President Ronald Reagan. Speaker Mills also met and briefly chatted with Rev. Billy Graham, who was the Guest Speaker at that years Annual Prayer Breakfast. In 1984 when Speaker Mills attended the second Prayer Breakfast He met the late Barbara Jordan, who was a guest speaker for the occasion. It was at these events that he also met Prime Ministers, Speakers and Parliamentarians from other Commonwealth and non-Commonwealth countries. Mr. Mills certainly played a significant role in the promotion of the Turks and Caicos in this way and shared his deep knowledge of the Islands' history.

Speaker Mills was fully acquainted with the Standing Orders of the House and enforced their observances with such authority that he earned the respect of all Legislators, and always protected the rights of the minority and ensured that their voices and views were well represented. He was impartial in all his rulings and saw his role as arbitrator.

He indeed earned the respect of all Members of the House and the country at large.

He was married to the late Mrs. Vivienne Mills and was the father of ten (10) children.