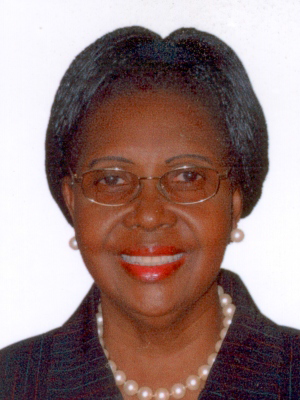 Mrs. Emily Augusta Saunders, the 6th child of Mr. and Mrs. Daniel Malcolm Snr. was born on 12th December 1943 in Cockburn Harbour, South Caicos. At the age of 3 years she attended Mrs. Alicia Malcolm and Miss Joycelyn Lockhart Kindergarten Schools. At the age of 6 years she was transferred to the all age Primary School where she studied and graduated at the age of 14 years. She sat and passed her first and third year Jamaica Local Examinations, and was employed as a local Teacher at the school, assisting Mrs. Marjorie Basden and the late Mrs. Iris Stubbs.

On completion of these two courses she worked at the Rockaway General Hospital where she did her practical training. She later returned home and for a short period assisted at the South Caicos Clinic. She was offered the post of Lab and Xray Technician at the Grand Turk Hospital but declined the offer for personal reasons.

In 1964 she was offered a job at the Government office in South Caicos and held several posts over a period of eighteen years. She worked as Postmistress, Secretary/Radio Operator, Accounting Officer, Assistant Manager Government Savings Bank and was responsible for training new members of staff, temporary and permanent.

Mrs. Saunders retired in late 1983 and entered politics in 1985. She was elected to the Legislative Council in 1985. Over a period of thirteen years she served as Deputy Speaker, Speaker, Minister of Health and Social Security. She served on many Standing Committees including the Expenditure and the Public Accounts. She was the first Member of the TCI CP A Branch to served as a member of the International Executive Committee of the Commonwealth Parliamentary Association for a period of three years as a Regional Representative for the Caribbean, Americas and Atlantic region and served on the Commonwealth Affairs Committee.

She attended many CPA Seminars and CPA Conferences representing both the Local and International CPA to many countries including St. Kitts, the B.V.I, Jamaica, Belize, Bermuda, Sri Lanka, Malaysia, Mauritius, South Africa, New Zealand and Canada.

She is a businesswoman and is the owner of Super Value Supermarket, she also works with British Fidelity Assurance Co. on a part time basis. Mrs. Saunders was instrumental in forming the Soroptimist International Club in South Caicos and has served as President for six terms, at present she is the sitting President.

Mrs. Saunders is married to the Hon. Norman Saunders and together they have four children, but her love for humanity and especially orphans and other under-privileged children, led her to open her home and her heart to many children whom she nurtured and cared for as her very own.

Her hobbies are singing, dancing and social work.