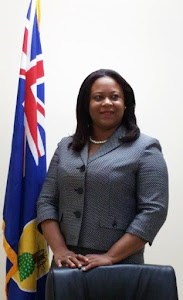 The Deputy Governor has appointed Ms. Brandie Anderson as Registrar of Lands to head the Land Registry of the Attorney General’s Chambers Lands Division. The appointment took effect on November 3rd, 2014.

Ms. Brandie Anderson is an Attorney-at-law who has been called to the Jamaican Bar for over 12 years. She has extensive experience in the area of land law particularly in the areas of land registration and conveyancing.

Much of her experience was gained at the National Land Agency (NLA) in Jamaica, one of the leading state owned and operated land related agency in the region. While at NLA, Ms. Anderson was employed as an Attorney at law in the Corporate Legal Services Division and practiced in several specialized departments including General Legal Services, Land Settlement Unit, the Highway 2000 Project and the Probate Unit. There she worked with the Commissioner of Lands and was directly involved in the compulsory acquisition of hundreds of parcels of land for the construction of Jamaica’s newest highways, Highway 2000. She also processed several land titles for beneficiaries of state owned land. Ms. Anderson also provided legal services in the lease and sale of Crown land and the administration of estates. She was awarded by the National Land Agency for her outstanding contribution to the Corporate Legal Services Division.

Prior to that, Ms. Anderson worked as an Associate Attorney in the firm of Raphael Codlin & Co. There she was involved in civil litigation. Her primary areas of practice were in contract law, the recovery of debt, company law, sales, division and transfer of property, administration of estates, divorce and other matrimonial related proceedings. Between 2003 April and 2004 May, she holds the record of being the only junior practitioner from Jamaica to have appeared in the United Kingdom Privy Council on eight separate occasions during that period. Two of those cases providing landmark decisions in the area of land law in Jamaica.

Ms. Anderson has also worked at the National Works Agency, as Manager, Legal Services. Ms Anderson was at the helm of providing expert legal advice and solutions to the Agency on a wide range of complex legal issues in relation to road improvement and construction, conveyancing, property damage and personal injury. Ms. Anderson was integrally involved in the drafting, vetting and negotiation of several multi-million dollar government contracts.

Ms. Anderson has also lectured in several areas of law at the Montego Bay Community College and specifically land law at the Para-legal Training Institute.

Ms. Anderson is the holder of a Bachelor of Laws, Upper Second Class Honours from the University of the West Indies, Barbados. She is also a 2002 recipient of a Legal Education Certificate from the Norman Manley Law School, Jamaica.

In addition, she has completed various professional training courses which include supervisory management and procurement. She has been trained in mediation at the Dispute Resolution Foundation of Jamaica. She also holds a Post Graduate Diploma in Management with Honours.

Under the executive leadership of Ms. Brandie Anderson, Registrar of Lands and the Deputy Registrar, Tresha – Gaye Ustanny, who also holds an LLB and a Legal Certificate, the Land Registry is poised for a very new and exciting phase of development which is focused on delivering more efficient and modern services, and ensuring that the public are well served.